District Meetings are held regularly. For information or to attend, please contact the District Office.

For a list of Sub Branches in the Wide Bay and Burnett District, please see the bottom of the page.

To ensure that programs are in place for the well-being, care, compensation and commemoration of serving and ex-service Defence Force members and their dependants; and promote Government and community awareness of the need for a secure and progressive Australia. Trevor served in the Australian Army for 20 years including a tour of duty in Vietnam. During a career in senior management with a large Australian company, he was responsible for the implementation of programs for Quality Assurance, Workplace Health and Safety and Rehabilitation and has experience in accident and incident investigation and critical investigation analysis.

Trevor believes in integrity, honesty and transparency. He supports the requirement for strong corporate governance within the RSL to ensure that ongoing welfare to veterans is provided and maintained at a high professional level. He was awarded the Order of Australia (Military Division) in 1982. 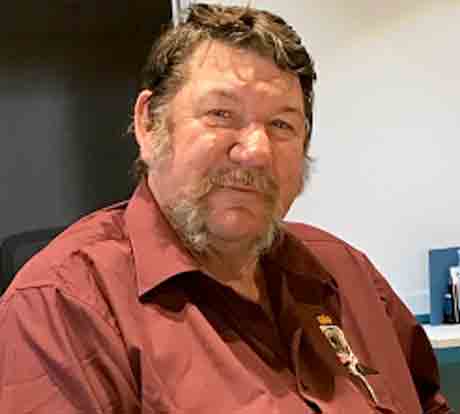 Hello I am Neville Tarry, one of your Wide Bay & Burnett District Board members and, President of the Moura Sub Branch. I joined the Salt Pioneer’s Unit in June 1976 in Roma and transferred over to 42 QRQ in Rockhampton in 1977. In 1988 I resigned from the Army Reserves due to my work commitments with Moura Mines with whom I was employed for 33 years. During that time, I did a range of courses such as Discrimination, Occupation Health and Safety and Training in Small Groups, which were a part of my work with Moura Mines.

I joined the Banana Sports Club and served as Vice President and President for a number of years and, in 1986 I also joined the Moura Sub Branch. I held the position as Vice President and then became President in 2004 to now 2017. For 1 year I served on the Board before Wide Bay Burnett District was dismantled. When we were reinstated I became a board member once again. My main aim is to help my fellow Veterans and their Sub Branch’s with the changing Administration and Welfare problems when they occur. David joined the 49th RQR Army Reserve at Wacol, Brisbane in 1978 and served for some 3½ years before transferring to 9 RQR Maryborough for approximately 12 months. Due to his employer at the time, he was unable to continue his Reserve service. He held various positions over 10 years within the KFC group from Brisbane to Rockhampton including managerial roles at Gladstone and Redcliffe.

David first moved to Monto in 2005 where he joined the Monto RSL Sub-Branch and was also Secretary/Manager of the RSL Citizens Club, for a period of 3 years. After a 4-year stint in Sydney, David returned with his family to Monto where he runs the family Funeral business. David’s RSL Membership with the Monto RSL Sub-Branch currently spans 14 years. He has held the positions of Sub-Branch Treasurer (2014-2018) and from 2018 to present day is the current Sub-Branch President.

David is very passionate about the RSL. With a few year’s committee experience behind him and, being a younger member, David feels he has quite a few years left ahead to offer his services. He believes that the younger generation can continue the great service provided by the older and past members. Hello, I am Graeme Davis your latest Board member and Secretary of Tiaro RSL Sub Branch.

I joined the regular Army in 1968 and, after recruit training, was posted to Sixth Battalion Royal Australian Regiment and served in Vietnam 1969, Malaya and Singapore with detachments to 1RHF England. I served for a period of nine years reaching the rank of temporary Corporal.

After discharge, I had various jobs driving and owning my own trucks. I obtained employment with a subsidiary of Shell Company as a driver eventually working my way up to State Manager.

I was involved with the Vietnam Veterans in Victoria being one of the founding members for Geelong. I was also involved with Geelong RSL Sub Branch for many years. We moved to Queensland where I joined the Maryborough RSL Sub Branch, then Hervey Bay RSL Sub Branch before transferring to Tiaro RSL Sub Branch in 2000. Over the past 15 years I have variously held positions of President, Secretary, Treasurer and delegate to District.

One of my aims is to see the name of the RSL back up where it was and regain the respect with the younger veterans. Martin served in the Australian Army for 9 years from 1988 – 1997, specialising in Logistics.

Martin continued this discipline in his civilian career working in manufacturing, warehousing and distribution, and security printing. Prior to his appointment as Gympie Sub Branch President, Martin was employed as a Funeral Director and Celebrant.

His core values are of integrity, philanthropy and altruism. Betty was employed by RSL Queensland as District Secretary in March 2017 and is currently based in the Bundaberg District Office. The Board and District Secretary roles were combined in March 2020. Betty has over 45 years administrative experience, has a Business Administration qualification, Real Estate (Property Management) Certificate and is also a Commissioner for Declarations.

Betty is an ex-RAAF spouse who has experienced several postings and many job changes. She had a 19 year public service career before posting, worked in various temporary roles within Department of Defence at Point Cook and, after further posting, joined Defence Housing at Wagga Wagga before transferring to Defence Housing Canberra as helpdesk support. Betty moved to Queensland in 2001 to support her family, worked in the Real Estate Property Valuation industry, and met and married Steve before ‘living the dream and doing the lap’ for 5 years.

Betty is proud that RSL Queensland has implemented employment assistance programs for ‘service spouses’ while at the same time providing the many new programs for current and ex-service men and women.

Get started with our 5 resume tips